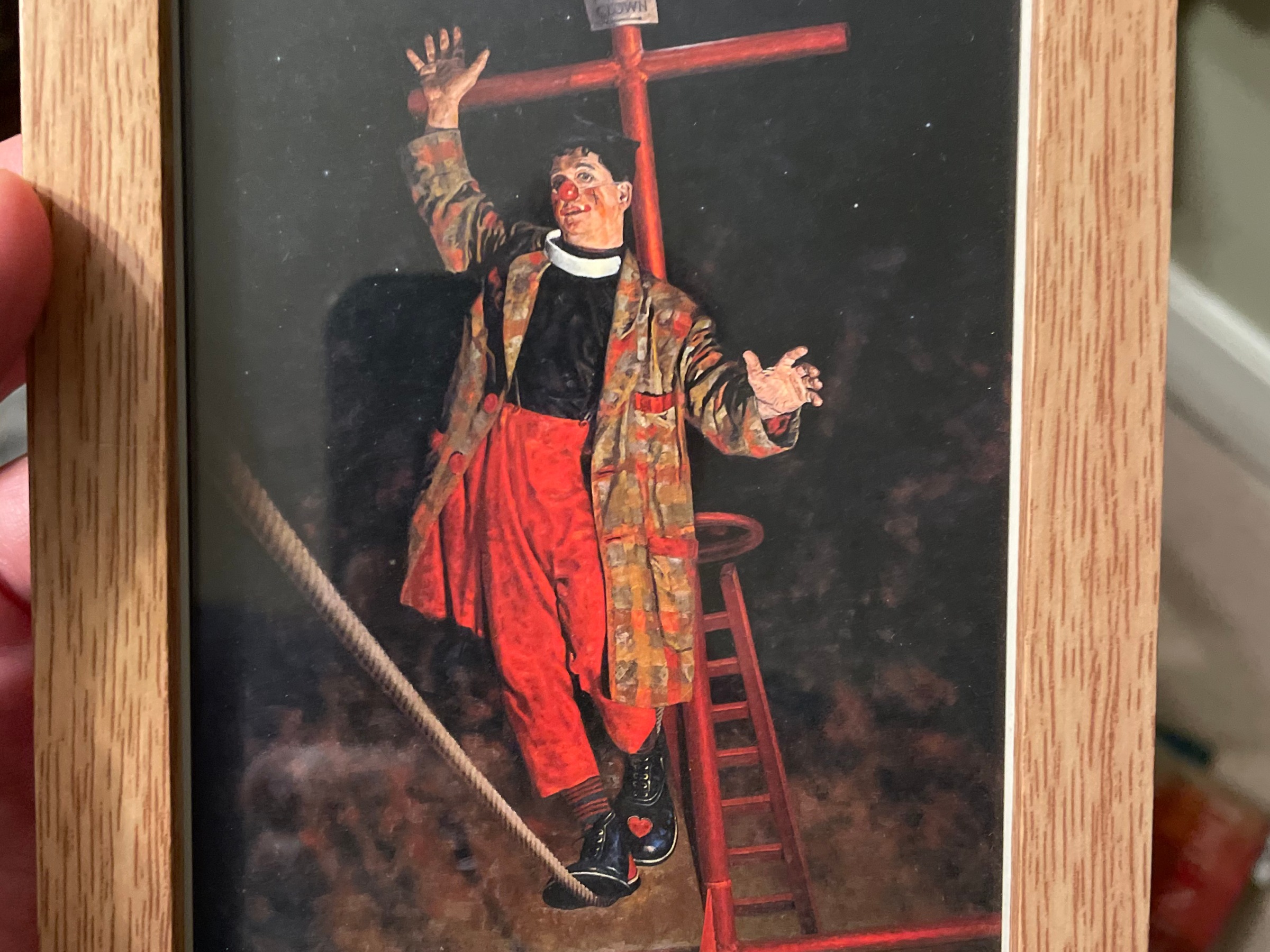 Some years ago at Great St Mary’s we were visited by the Rev Roly Bain (the Holy Roly), who slack wired his way down the naive, dressed as a clown.  A complex and somewhat controversial figure, ordained but audacious.  One who took delight in subverting the order of the Church and acting the holy fool speaking truth to power.

I was stirred by his performance and was moved when I saw this postcard of a portrait, which now sits in a prayerful corner of my study.

In today’s reading Paul speaks of foolishness of the Gospel and how God turns the wisdom of our age on its head.  We certainly live in strange times, where our norms have been subverted.  Times when zoom means stay and an evening out means putting on a best shirt on and staring at a glass screen.

But Christ’s Passion is always one of challenging the status quo.  This pandemic may well both force and encourage us to examine the way we live our lives.  But if we listen carefully, Jesus’ words are continually inviting us to do so and to act out of love, for both planet and people.

Paul is writing in a context of the sophisticated culture of the Greeks; of a society of philosophy (Sophia the love of wisdom) and the pursuit.  A culture in which the idea that the death of a criminal of a despised and disobedient race would have significance, was sheer  folly.

Alongside this, Paul’s own Jewish background as a Pharisee, a man of learning, and knew all too well what was expected and possibly feared, was a political figure to deliver them from the tyranny of Roman rule.  Instead, we have the son of a carpenter from a dusty town on the edge of the Roman empire, who travelled round with a ramshackle group of prostitutes, tax collectors, the diseased and the poor.

Living in a city where intelligence is prized, it may seem a strange approach, and a strange choice of friends,  but this is how God God chooses to act. “I will destroy the wisdom of the wise’

This is the folly, the foolishness.  Not a figure in a dark ill fitting suit and a crisp shirt, standing at a podium day after day; but a man telling stories, healing with love and reaching out in life and death on a common gallows and beyond to the light of Easter morning and today.

This is an extraordinary Lent where much of our life is upturned. Where friends and families are separated and much of our lives that we took for granted has been taken away.  But perhaps this time of forced abstinence gives us an opportunity to see more clearly the folly of God and the wisdom of our age.  Perhaps it is time for us to offer God’s love a little better and to speak in kindness more, however foolish that may make us feel.