As is often my way in life, I first thought that I needed to approach walking the Camino in the most extreme way: in that I wanted to try and walk it all. If you don’t know , the whole of the Camino Francés – there are paths that come from every direction in Europe and beyond- is 770 km and begins in the Pyrenees……..

When I tell you that it was only about April / May this year that I really started to feel like myself again after heart surgery in late January 2017, you will probably understand that it was with and through Grace and with humility that I revised my plan. Instead I decided to walk “the last 100km to Santiago”.*

Equally I realised that trying to carry my whole pack was a challenge too much at this stage and so opted to travel with daypack and have the rest of my stuff delivered from place to place.

I also realised that the standard 5/ 7 day itinerary offered by the numerous Camino specialist travel companies was possibly going to be a bit ambitious for me at my stage so with “Santiago Ways” I developed a 9 day schedule.

*Pilgrims receive a certificate for walking at least 100 km of the Camino. Sarria – the common starting point provides a 117 km journey. So 9 a day schedule works out about 13km a day- about 8 miles That Way would give me plenty of time too for it to be much more than just an endurance test. Of course with factoring in the terrain- whist its not a mountainous stage, Galicia (as I was to discover) is pretty hilly! – and the potential heat it would be challenge enough…..

The final part of “disclosure” is that I opted to stay in modest hotels and guest houses rather than Albergue – pilgrims hostels. To be honest, I’ve done my share of hostels and camping and as a number of friends pointed out , it would not be ideal for me to get sick ( which happens from time to time in such shared living ) and be putting my body under the strain and stress of walking.

So with all that explained , what follows is a series of posts of my experience on the Camino. 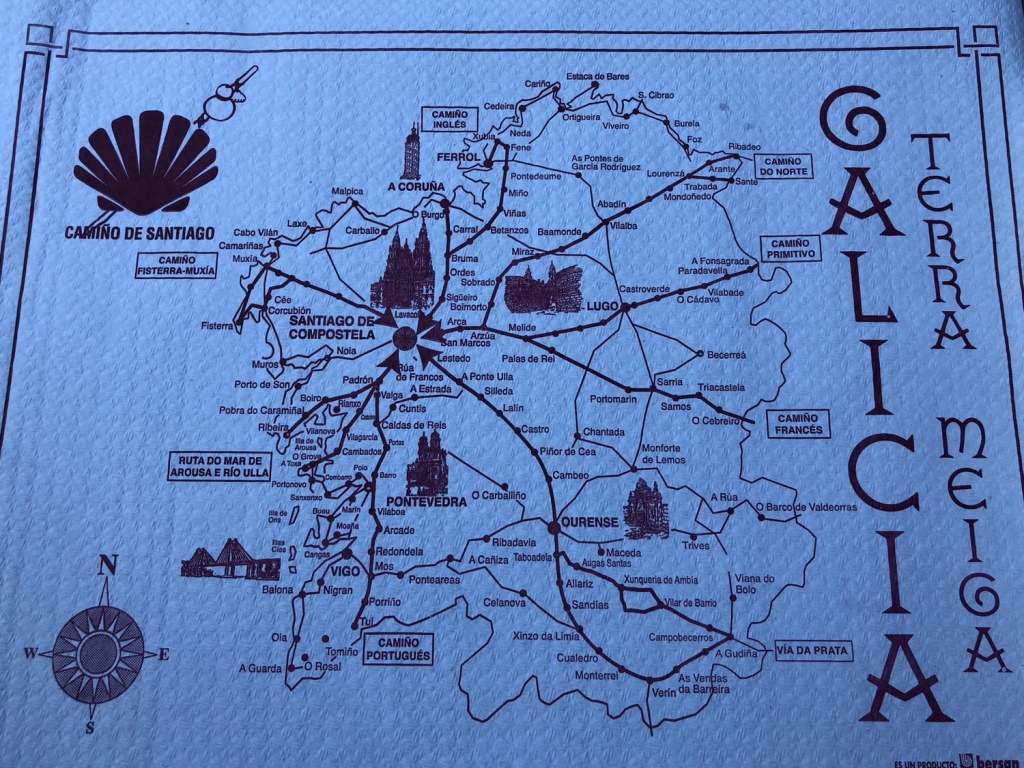 My table mat at a restaurant on my first night Sarria in Northern Spain , where I was to start my pilgrim walk the next day…..