The next morning, I found myself walking up the staircase of Shire Hall as a new councillor and greeting the CEO and fellow councillors.  It reminded me somewhat of being back on the stage in a production of ‘My Fair Lady’ in the Ball scene, as the rather nervous Freddie Eynsford-Hill. I was therefore doubly surprised to see someone I had seen in a very different setting just days before, who also had a history of theatre, and now like me had just been elected as a County Councillor.

During the campaign a very dear friend of mine died suddenly and his funeral was the day before the Council election. To add to that, I was asked by my friend’s partner to take the funeral and whilst it was an honour to do so, it was also an incredibly draining experience, and yet in someway uplifting to be responsible for holding his loved one’s grief.

The new colleague I greeted on the balcony was a mutual friend and I was touched that he thanked me for the way I presided over the funeral. Another example of how the different parts of my life seem to interweave.

A couple of weeks later, I was in a training session for councillors on diversity issues and let’s just say I was shocked by some of the comments shared by some senior councillors. There was one exclamation that particularly hit me. We were seeing the results of a groundbreaking survey of young people: looking at the correlation between sexual identity, gender, physical and mental health. Somebody interjected ‘I wouldn’t want my son being asked questions like that’.

I was thrown into a panic. I could feel my heart pounding as my mind rapidly tested the options for a response; do I stay silent, (after all I have only been a councillor for a couple of weeks, maybe it is not my place to challenge such a view?).  Or do I speak up; but what might the consequence be of doing so?

Whilst I was having this inner monologue I found that my body had taken over and I was standing up! Apparently I was going to say something….  ‘I think you may find in that situation it is less about what you may want and more about what your son may need’. I immediately sat down!

When I was vetted as a Councillor, I had been asked about my experience of diversity and I spoke of my own struggle of coming to terms with my sexuality.  I had absolutely no idea at that stage how prominent that experience and values would be in driving change as a councillor.

At the end of the training session I had a chat with the trainer and by the time I had left the room, I found myself a member of the Council’s Diversity Group.  Within weeks I was attending the premiere of a new diversity film for Primary Schools and within the year I was honoured to be asked to help the launch the film in Cambridgeshire.

Inspired that there was an opportunity to challenge the status quo, I asked the Council why it did not fly the rainbow flag for LGBT History Month and eventually took a motion to full council and with cross party support, though sadly not unanimous. I was delighted that the motion was won.  Out of interest, there was almost the same level of support from UKIP Councillors as there were from Conservatives, which just shows the complexities of politics…

To mark the first year of flying the rainbow flag we put together a human rainbow and I was moved how, when repeating the event the next year, that we had grown to nearly 100 in number.  I felt blessed that I live in a country where not only did the police engage positively but asked me what colour we would like them to wear.  How far we have come in so little time, but sadly with so much pain. 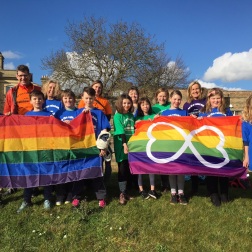 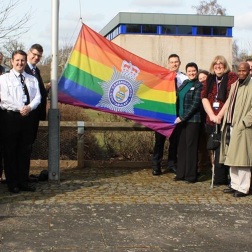